When tracing the roots of modest fashion, it becomes clear that its history has been long lost and forgotten. From the early eighth century, which was dominated by the Islamic Empire, to the Ottoman Turks in the fourteenth century, modest clothing has been designed and worn by women from many different cultures and backgrounds. The definition of what was to be worn was not homogenous either, but had a varying degree.

The ‘modest’ woman however, should not be reduced down to her dress sense. The attire we choose to astonish and captivate the world’s heart with is merely one part of the identity. Modesty is a concept that delves into a long deep dialogue, with contrasting opinions and thoughts but nonetheless, we must not magnify our differences. After all, time has sequentially proved that the definition of modest clothing has adjusted, accordingly with social customs.

Saudi Arabia –  Pre-Islamic Arabia
In pre-Islamic Arabia, women were already wearing long robes and shawls that would drape over the shoulders and ensured a loose effect. 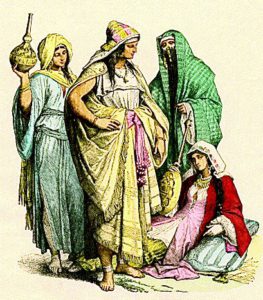 Women’s clothing in a pre-Islamic era

Saudi Arabia – Abbasid Islamic Period
During the Abbasid Islamic Period in the eighth century, Muslim women continued the legacy of colorful clothing. Although, this was not too long after the emergence of the mystic and elegant black abaya appeared. It is the same black abaya that is symbolic and present in the Muslim world today. Yet this unraveling transformation has a story behind it.

Some time in the eighth century, in the kingdom of Saudi Arabia, a poor merchant began selling cloaks: one in every color. One day, the merchant ran out of his colorful cloaks and was left with only black ones that were not wanted by anyone.

He felt despair, but the merchant recalled that he had noble poet as a friend and decided to make a visit to ask for help. The poet then composed a poem that praised the beauty and blessings of the woman who was seen dressed in a ‘mysterious’ black garment, mentioning that black was the color worn by the rich and the noble.

The story ends there. Moments after the poem was written, women flocked to the cloak seller leaving him rich and the women leaving the shop feeling richer.

Ottoman Empire – Fourteenth Century
Dating back to fourteenth century, where the Ottoman Empire ruled the borders of the Mediterranean Sea, women’s clothing had an interesting, yet magnificent aura that would simultaneously convey elegance and royalty. The enatri, otherwise known as kaftan,was the primary garment of choice. It was worn with a gömlek (under tunic), a hirka (cardigan) , salvar (ankle-length trousers) and a ferace (overmantle).

A Lady in Istanbul in the entari, hirka, salvar and a ferace

As Aise Asli Sancar, a renowned writer on Ottoman women, once said that the Ottoman women are much more complex and multifaceted than usually portrayed. And indeed this is true. There is a plethora of knowledge to learn about the fashion that was prevalent during the reign of this empire.

Headdresses at the time of the Ottoman Empire were prevalent. The Seljuk women wore embroidered cloths on their heads, or were seen wearing a dazzling diadem dressed with a gem in the shape of a crop at the center of the forehead. A couple of centuries later, starting from the early seventeenth century, women’s headdresses began to transform into lighter caps, manifested by the hotoz, as shown below. But of course, like any other form of clothing, these headdresses were ornate and diversely unique.

A Turkish lady wearing a multi-colored, traditional outfit, including the hotoz,  that was ubiquitous throughout the Ottoman Empire. She is seen reading a copy of Al Quran.

The image above shows us the style of women’s clothing that was once the stamp of female attire in the arabesque world of Morocco. Its potent effect as a fashion statement and as an illustration of boldness and beauty is still alive in modern fashion, as we see young women across the globe wearing these long flowing robes and colorful headscarves.

The influence of the kaftan has stretched far to reach even the high end fashion shows in recent times.

So, modest fashion has transformed through history, yet kept its primitive essence of elegance, length, and style. The root of it is what built the modest industry today. The trends and items that we are now exposed to, usually found online, have been influenced and shaped by what women wore far back in eighth century. Alas, it would be nice to see modest fashion having the larger scale influence that it deserves. Maybe one day we’ll live to see fashion week London, Milan, Paris, and New York implementing a separate runway dedicated to modest fashion!

Sara is an undergrad student living in London and through writing she hopes to inspire others. She is obsessed with cats, green tea and likes the sound of rain during the night