The past week saw the passing of Queen Elizabeth II at the age of 96 and after 70-year reign. Her son, King Charles III, will ascend the throne and become the oldest person in history to assume the British throne at the age of 73.

Over the past few decades, King Charles’ fascination and admiration for Islam have been well documented and he has made several speeches on Islam over the last 30 years.

In 1993, the then Prince of Wales made a speech titled ‘Islam and the West’ at the Oxford Centre for Islamic Studies, The Sheldonian Theatre, Oxford.

During his speech, the new King made numerous references to the fact that modern history had a lot to owe to the Islamic world and that due to modern prejudices “we have tended to ignore or erase its great relevance to our own history.”

King Charles also made statements during his speech which Muslims have unknowingly been echoing for the past 30 years.

“Our judgement of Islam has been grossly distorted by taking the extremes to be the norm. That, ladies and gentlemen, is a serious mistake. It is like judging the quality of life in Britain by the existence of murder and rape, child abuse and drug addiction. The extremes exist, and they must be dealt with. But when used as a basis to judge a society, they lead to distortion and unfairness.”

Does that sound familiar?

1996 – delivered a speech entitled ‘A Sense of the Sacred: Building Bridges Between Islam and the West’ where he suggested that developing a better appreciation for the Islamic views on natural order would “help us in the West to rethink, and for the better, our practical stewardship of man and his environment”

2003 – during his visit to The Islamic Foundation, the Markfield Institute of Higher Education declared “Thank goodness for Arabic numerals and the concept of Zero introduced into European thought by Muslim mathematicians!”

2004 – the then The Prince of Wales during a visit to the Muslim College, Ealing, London partook in Eid celebrations with the Muslim community.

2006 – during the height of the anti-Muslim sentiment across the West King Charles gave a speech titled Unity in Faith at Al-Azhar University, Cairo, Egypt saying “We need to remember that we in the West are in debt to the scholars of Islam, for it was thanks to them that during the Dark Ages in Europe the treasures of classical learning were kept alive.”

2010 – he spoke about how the west can learn from Islamic principles to save the environment.

2013 – during the World Islamic Economic Forum in London King Charles spoke about how the Islamic principles relating to finance were a model that should be replicated to provide a more sustainable and fairer society.

2017 – following the terrorist attack in Finsbury Park where Muslims were targeted King Charles was the first to react on behalf of the Royal Family and shared a statement of solidarity saying he had always taken a “great interest in the Muslim community in this country.”

2018 – a book, Charles At Seventy: Thoughts, Hopes and Dreams, mentions how he studies the Quran and thinks Christianity can learn from Islam.

2022 – just this year the new King took it upon himself to praise the Muslim community’s selflessness during the holy month of Ramadan. 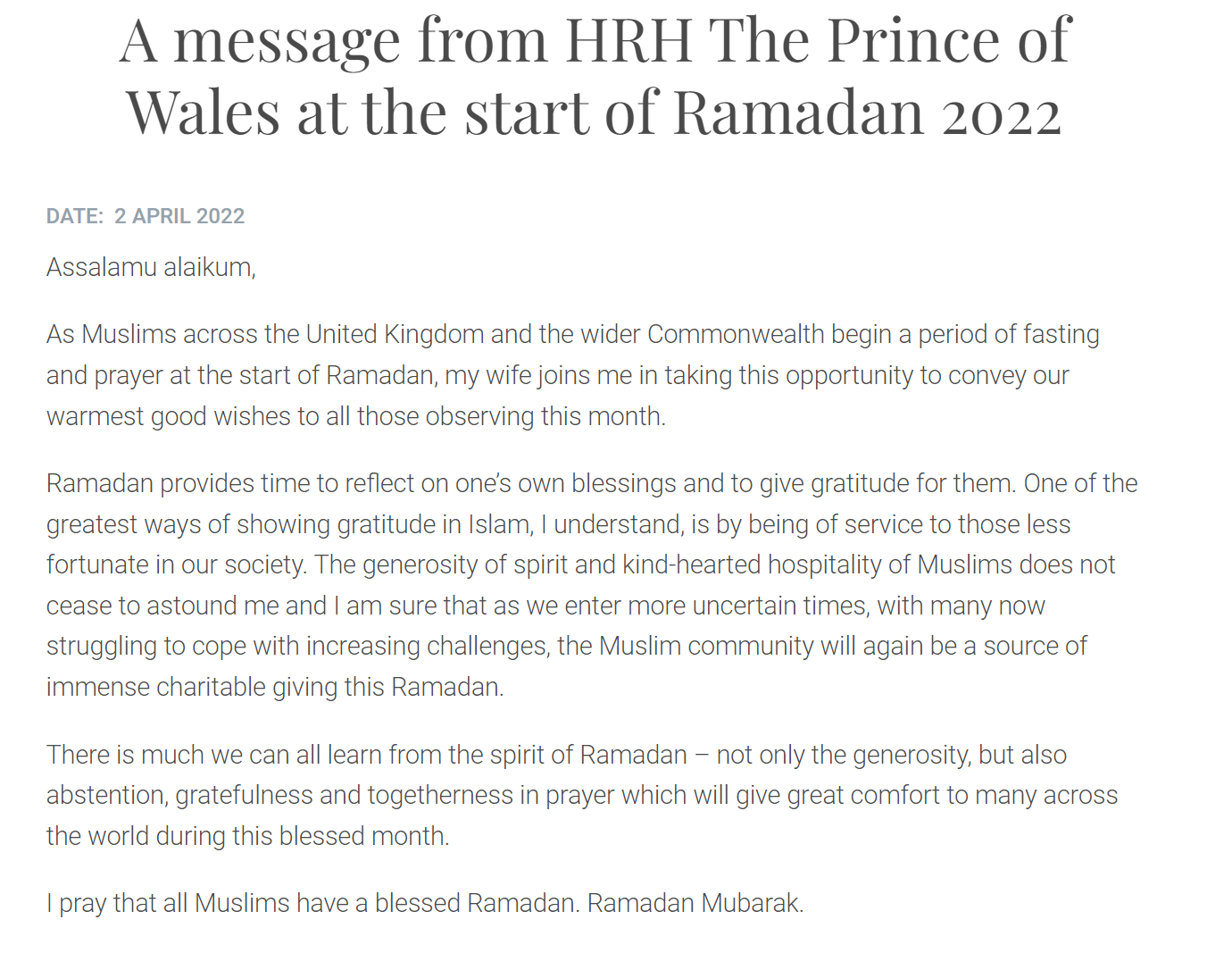 As the new Head of the Church of England, some have expressed their concerns about how sympathetic King Charles is to the Islamic faith, with some even suggesting that he had converted to the faith a long time ago, whilst this is unlikely, Muslims in the UK have reason to be optimistic about Charles ascending the throne.