The Kyrgyz people originate from the Siberian region of Yenisey Valley. Their main language is Kyrgyz, a Turkish language. Today, the majority Kyrgyz people live in Kyrgystan, the formerly Kirghiz Soviet Socialist republic. However, there are large parts of the population living in Afghanistan, Tajikistan, Uzbekistan and China.

In Afghanistan, there only remain around 1100 Kyrgyz people. They have been living for centuries in the harsh environment in the Pamir region in Afghanistan, more specifically the eastern Wakhan Corridor. At an altitude of 4000m, these Muslims live in their round felt tents.

The Kyrgyz’s history makes them even more remarkable as a population. They  got trapped in Wakhan, in the 20s and in the 40s, after the Afghan borders were military sealed with the Union of Soviet Socialist Republics and the People’s republic of China. They escaped the communist collectivization to safeguard their nomadic lifestyle.

Kyrgyz people can also be called the vertical nomads. Lead by a Khan (a leader), they move yearly from the low-lying winter quarters to the high summer pastures of the Pamir mountains. 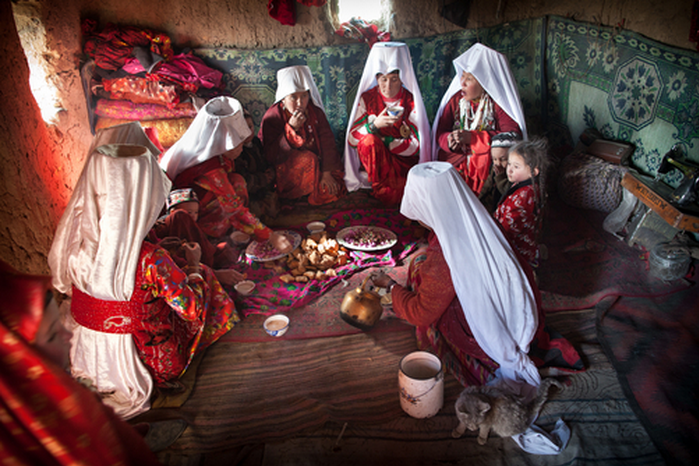 We can find a big variety in the Kygryz´ food. Their everyday dishes include noodles, dumplings, fried rice, pumpkin, Pelmeni (a Russian dish), potatoes, beef, chicken, turkey, sheep and goat. The day consists of 4 to 5 meals a day, but only 1 big meal. The rest of the day includes snacks like bread, tea, jam, clotted cream, butter and various salads.

Kyrgyz live so high up in the mountains that there are no roads leading to them. So, no doctors can be informed in case of emergency. Less than half of the children attain the age of 5 and a lot of women die during childbirth.

Hind Channa is an intern student at Mvslim.com. She's a Moroccan Belgian communication strategist and loves new challenges, to get completely out of her comfort zone, and travelling.